We use cookies to help give you the best experience on our site. By continuing, you agree to our use of cookies. Learn more about how they improve your experience. 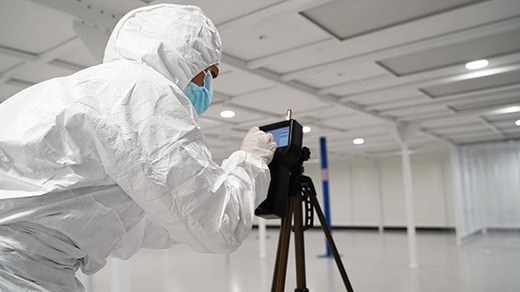 If we were to pick a word that describes our September, that word would be flexible. We are sure that our clients would say the same! We’ve been appointed by clients old and new for cleanroom design and build projects in the UK and Europe.

We won a contract for a GMP cleanroom in The Netherlands for a company that is producing specialist medicines as a home care service. The company needs their investment to be flexible so expansion capability has been built into the facility.

C2C has designed a cleanroom suite that meets EU GMP requirements for Grades B, C and D, Even though the facility will not be used for full GMP initially, it has the flexibility to be meet these requirements in the future. Even the ECO control system will be futureproofed, so it can be upgraded to feature continuous monitoring when required to do so.

But it’s not just the cleanroom design where we’ve offered flexibility. Our regulatory support has meant that the client is being supported with their URS creation and will then go on to perform DQ, IQ, OQ and PQ.

We’re seeing a lot of activity in mainland Europe, mostly in the Benelux and DACH regions. In Germany, we’re working on an especially interesting project with an organisation whose parent company is in Asia. We’re designing an ISO 6 hardwall cleanroom with temperature and humidity control that bridges the expectations of cross-continental design considerations.

We’ve also started a new ISO cleanroom design and build project for a longstanding customer in the North West of the UK. This company is a large manufacturer and supplies its protein powders to major retailers. We’re supporting them with a new softwall cleanroom for their new blend room, plus a CNC area for pouch packaging. Watching clients’ growth is satisfying as we like to think their cleanroom has played an important part in the high quality of their end products.

In Edinburgh, we’ve been contracted to deliver an ISO 9 cleanroom area for a lab that will be used to coat cardboard, so it can be used as environmentally friendly water bottles. This room will feature temperature and humidity control with gases and water supply.

A client who supplies semiconductor services to the defence industry has appointed us to deliver an ISO 5 cleanroom into an existing ISO 7 cleanroom. We can’t say too much about this existing customer room or their room as it is all top secret, but we are extremely happy they have chosen to partner with us again.

And finally, we’re working with an established medical device manufacturer in Gloucestershire who we’ve worked with many times before. This cleanroom project is an ISO 7 softwall cleanroom to produce a filament for medical implants.

As well as our custom-built cleanrooms, C2C also offer a range of ready-to-ship modular cleanroom kits, perfect for use as an entry-level solution or for a quick way to react to growing production demands.

If you’d like to talk to us about your next cleanroom project get in touch today and we’ll start the ball rolling.

A true cleanroom panel, this system is perfect for projects which need to adhere to GMP guidelines.

Softwalls are the most economical type of modular cleanroom tent wall construction. Clear and flexib...

Read more
Visit the knowledge base

Are you ready to start a project with us? Get in touch!