We use cookies to help give you the best experience on our site. By continuing, you agree to our use of cookies. Learn more about how they improve your experience.

Operational Qualification (OQ) is a documented program to demonstrate that the Cleanroom, when operating within the defined parameters, can consistently perform and maintain the specified conditions.

In action, this means identifying and inspecting facility and equipment features that can impact final product quality.

The OQ should cover worst case scenarios. For example, if the cleanroom still operates correctly at the minimum and maximum temperature and humidity limits specified in the URS.

During OQ, each test must be carried out individually. For example, if the same sensor is used for temperature and humidity, our test engineers will test these functions separately.

The output of this phase of qualification is an OQ report detailing how the functional requirements of the cleanroom meet what is specified in the URS.

For the initial Performance Qualification our test engineers will repeat what has been done at OQ but now under load, rather than as built.

For a cleanroom particle count, this would be Operational, as opposed to At Rest. For a piece of equipment, e.g. a freezer or incubator, it would be working with its typical load, rather than being empty. 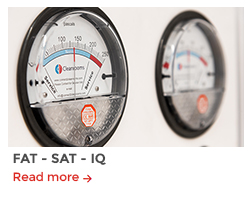 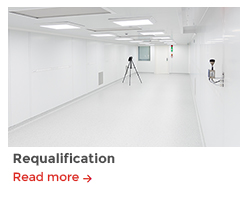 Can't find what you're looking for? Get in touch!